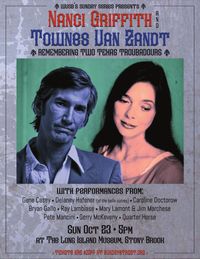 Pete Mancini will emcee the evening which will benefit the Sunday Street Series and WUSB.

The event is co-produced by Pete and Charlie Backfish.

Nanci Griffith’s passing on August 13, 2021 was universally mourned in the music world. This Austin native received critical acclaim for a career that included sixteen original studio albums as well as two ‘covers’ collections, paying homage to songwriters who influenced her own writing. On the first of those two collections, ‘Other Voices, Other Rooms, she included her version of Townes Van Zandt’s ‘Tecumseh Valley.’ Her song, ‘Up Against the Rain’ is about Van Zandt.

Townes Van Zandt, from Fort Worth, has been considered influential not only by Nanci Griffith but by countless artists cutting across several musical genres. Many of his songs are regarded as masterpieces of songwriting with Steve Earle recently recording an entire album of them. Van Zandt passed away on New Year’s Day, 1997, at age 52. In the 2000’s, extensive interest in him resulted in two books and a documentary film.

Tickets are $20 per person, and can be purchased in advance by heading to www.sundaystreet.org

We are pleased to announce that our concerts will take place in the beautiful Gillespie Room at the Long Island Museum, Route 25A in Stony Brook Village. We’ll be able to accommodate one hundred people and will have wine, beer and cider available at the shows.